* Observe wildlife from a distance. Do not follow or approach them. (LNT Principle) *

Making their way up a stream in the local hills one day, my son and his friend had suddenly come upon a python lying in a small puddle in the stream. Had he been looking somewhere else but where he was stepping, said my son, he could have stepped on the reptile. Back home, he excitedly showed me this photograph, saying how intrigued he was that the python had not moved from the spot because scrambling up they had created enough noise to have spooked all forms of wildlife in the vicinity. I asked to see all the photos he had taken when he said he had quickly snapped that one photo before sneaking off so as to not disturb the animal. The snake had not stirred at all throughout the encounter! 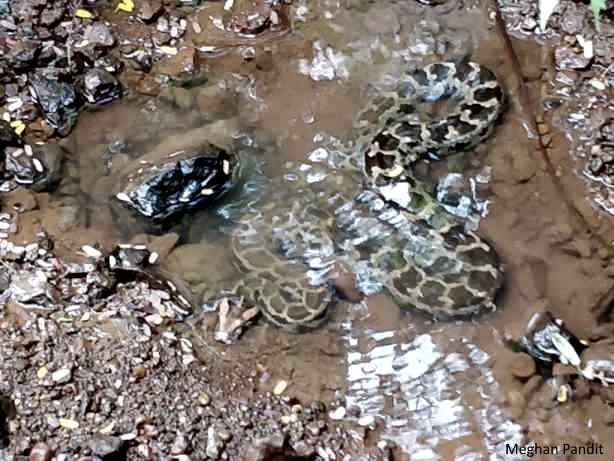 We continued to discuss possible reasons for the python having being so unconcerned at what could have been a threat. Had the python been just supremely confident of its camouflage? Or merely lethargic after having swallowed a rodent? I even wondered if this behaviour was driven by the fact that there would be no predator of a python in these hills… except Man of course. But human footfall on the few trails that exist in these hills has drastically reduced in the past few years, and the location was anyway ‘off-trail’. Whatever the reason, the python had not moved a muscle. And why it had preferred to rest in a puddle in the morning was another mystery! Weren’t snakes supposed to be basking in the sun to absorb heat in the morning?!

Be that as it may, I complimented my son on the appropriateness of their response in the context of one ‘Leave No Trace Principle’ which says “Respect Wildlife”. This was exemplar behavior in today’s digital times when phones go clickety-clack at the drop of a finger.

I grew up in the days of books and magazines and no digital media. During my college days, I was a member of four different libraries because of the speciality of books in each one of them. The only other way to access exclusive and distinct information was to scour pavements for old books and hope to strike gold. I have found some really crazy stuff on the Mumbai and Delhi streets! My primary aim was to get books and magazines on wildlife and adventure. Pavement booksellers, who were surprisingly knowledgeable, could get you books if you were tenacious in establishing a relationship with them through persistent visits. Wildlife was understood by these worthies but my attempt at explaining hiking and rock climbing always invited bemused looks! 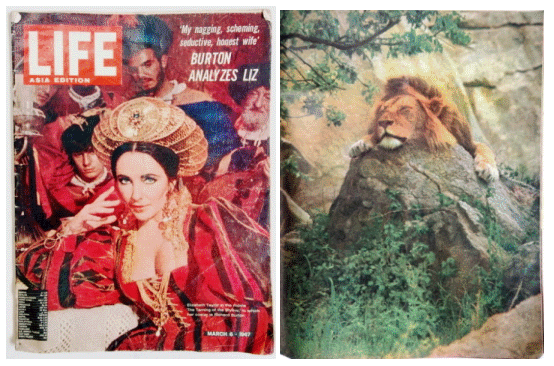 And then came the era of multiple TV channels and the internet. In the early days, I remember when I first watched the close-up of a lion in hot pursuit of his prey. I was quite awestruck by two things, the sight of a lion’s face filling the TV screen in minute detail and the technology that made it possible. I saw his mane being ruffled by the wind, the small movement of his whiskers and how the cords of his leg muscles stood out as he propelled himself off the ground with each leap. This was magical to me! In my school days, I used to hoard pictures of big cats and they have always been my favourite sketching subject. The only time I had gotten to see a moving big cat was either in the odd film on wildlife that had made its way to the Indian theatres or during visits to zoos across the country. Visiting wildlife sanctuaries was a luxury and places like the Serengeti, Galapagos and Australian Outback might as well have been on another planet. 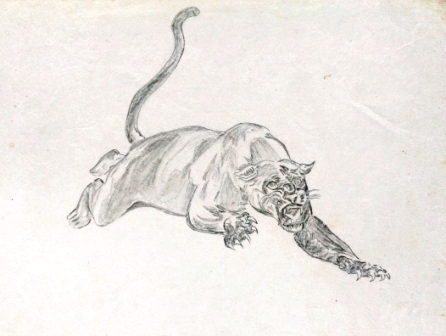 Today’s complex combination of interest in outdoors and adventure, advanced technology in multiple fields, ease of travel, prolific photography and a drive to share with the world one’s stories and photographs is a bit bewildering. I was quite aghast when I first came to know that some wildlife photographers are not averse to doing ‘unethical’ things like clearing foliage around a nest to get an award winning shot or disturbing a young mother animal struggling to raise her young ones in safe secrecy.

Fortunately, there are codes of conduct like ‘Leave No Trace Seven Principles’ and ‘Ethics in Nature Photography’ to make us pause and think about our actions and the effect of these actions on our environment.  Maybe we need to drastically reduce our footfall in wild areas when there are enough researchers and professionals to shoot photographs and films of life forms that fascinate us. It is time to realise that I don’t need to show my friends and others the photograph that ‘I’ took. The tigers and lions and all other life forms we so much love would love us for showing a bit of restraint!

I think this is a very important point of Leaving no trace. The initial challenge is to get the young ones excited about the topic and a lot of times the motivation for going on the lifelong journey/view point of preserving this one world we have–does not come till kids experience some of these extraordinary creatures first hand–off course with the encouragement of their elders.

Thanks, Nakul… ‘lifelong journey/viewpoint’: so true! You have hit an important aspect.