* Bringing Concepts, Practices and People Together *

The roots of so many good things lie in humble beginnings where an idea that catches the fancy of some people gets articulated on the back of an envelope or a paper napkin in a restaurant. I have seen a similar process happen on mountain trails where stray conversations meander from topic to topic and slowly generate an exciting sounding notion that soon gets nurtured into a perfectly practical concept. One such process happened with Swati Khanolkar, and I can trace its roots to exchanges that we had while descending the narrow gorge that forms the upper reaches of Kundalika River Valley which is about 150 km. SE of Mumbai. 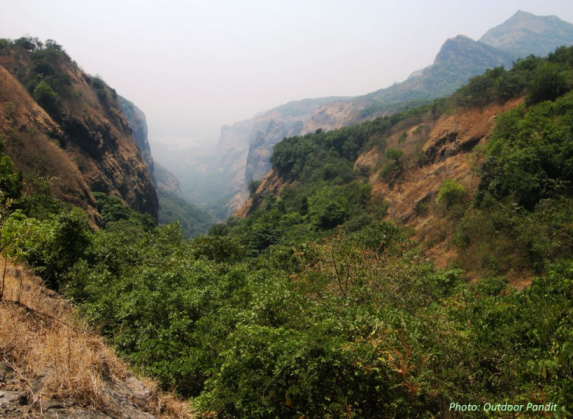 Scrambling down that spectacular and steep gorge with a small bunch of friends (and my son, Meghan!) has now become an annual pilgrimage for me. Swati’s husband, Amit (photos taken by him are scattered across my posts), accompanied me twice before Swati could accompany us on that route one year. I think it is pertinent to briefly describe the landscape that we walked through, as I believe it influenced our conversation. This drainage drops down from the edge of the Deccan Plateau to join the coastal plains of Konkan near a hydel power station situated at village Bhira. The power station is one of the epochal landmarks of this part of the Western Ghats, the mountain range that runs parallel to the western coast of India. It also has the distinction of receiving one of the highest rainfalls in the state of Maharashtra. Imagine the quantities of water that cascade down the sheer slopes of this massive cleft in the ramparts of the Western Ghats… the resulting torrent that pours down in between the enclosing walls of the ravine tends to change the raw scenery every year. Since the monsoon lasts till end of September, I wait till the start of the new year before heading out for this trip just to ensure that we find dry rock surfaces on which to wend our way down. I always go there with ropes and other paraphernalia, prepared to rappel off a freshly formed drop between the gorge’s narrow walls. 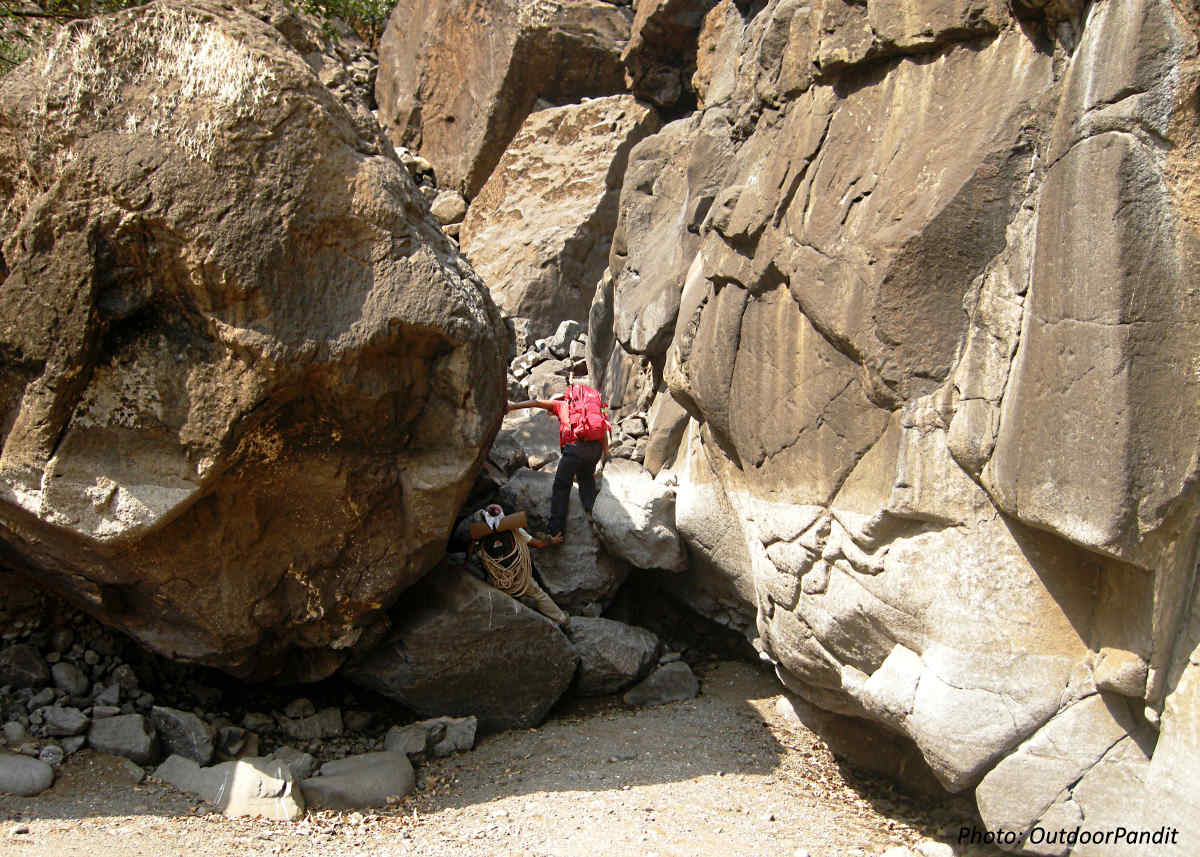 There is no trail for almost half of the way down to the plains. Vast vertical rock faces flank the chute in some places, while some stretches are choked with trees and shrubs and boulders that have broken off in chunks from high above. Some spots are nothing but big chaotic jumbles of rocks. A few boulders are the size of buildings! There are places where I prefer to drop my pack and scout the way ahead simply because the previous year’s terrain may no longer be the same. At some places we all remove our packs, line ourselves in near-vertical positions wedged between narrow chimney-like confines of the gorge and pass down our packs one by one! The beauty of it is that this is a classic scramble involving easy risk management. The icing on the cake is the presence of little and big rock pools of crystal clear water lying spread over rocky flats or in shadows under massive boulders. An adventure straight from the story books. No wonder then that this is the only place that my son, a teenager, is actually highly enthused to visit each year with his father! 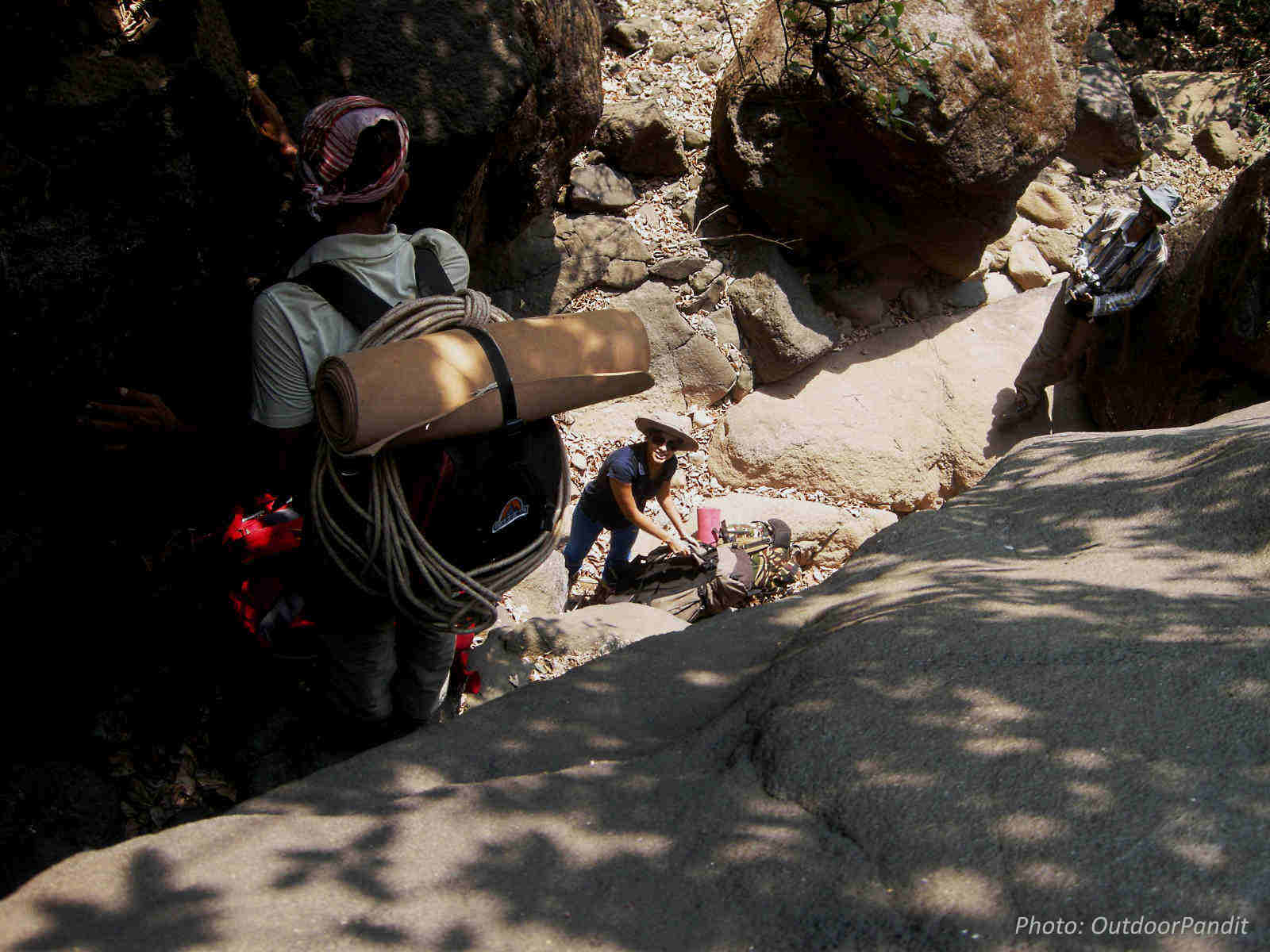 Swati is a clinical psychologist. She founded the ‘In Vivo – Mumbai Centre for REBT’, which is affiliated to Albert Ellis Institute, New York, U.S.A. ‘In Vivo’ not only counsels through therapy sessions but also conducts training programmes in Rational Emotive Behaviour Therapy (REBT). They have been conducting international trainings in REBT every year for the last five years now. Recently, they hosted the first international conference in REBT from India. By now you must have started wondering what should her background have anything to do with outdoors and hiking and new ideas getting nurtured! Well, not exactly outdoors but certainly outdoor education… and therein lies an exciting development. 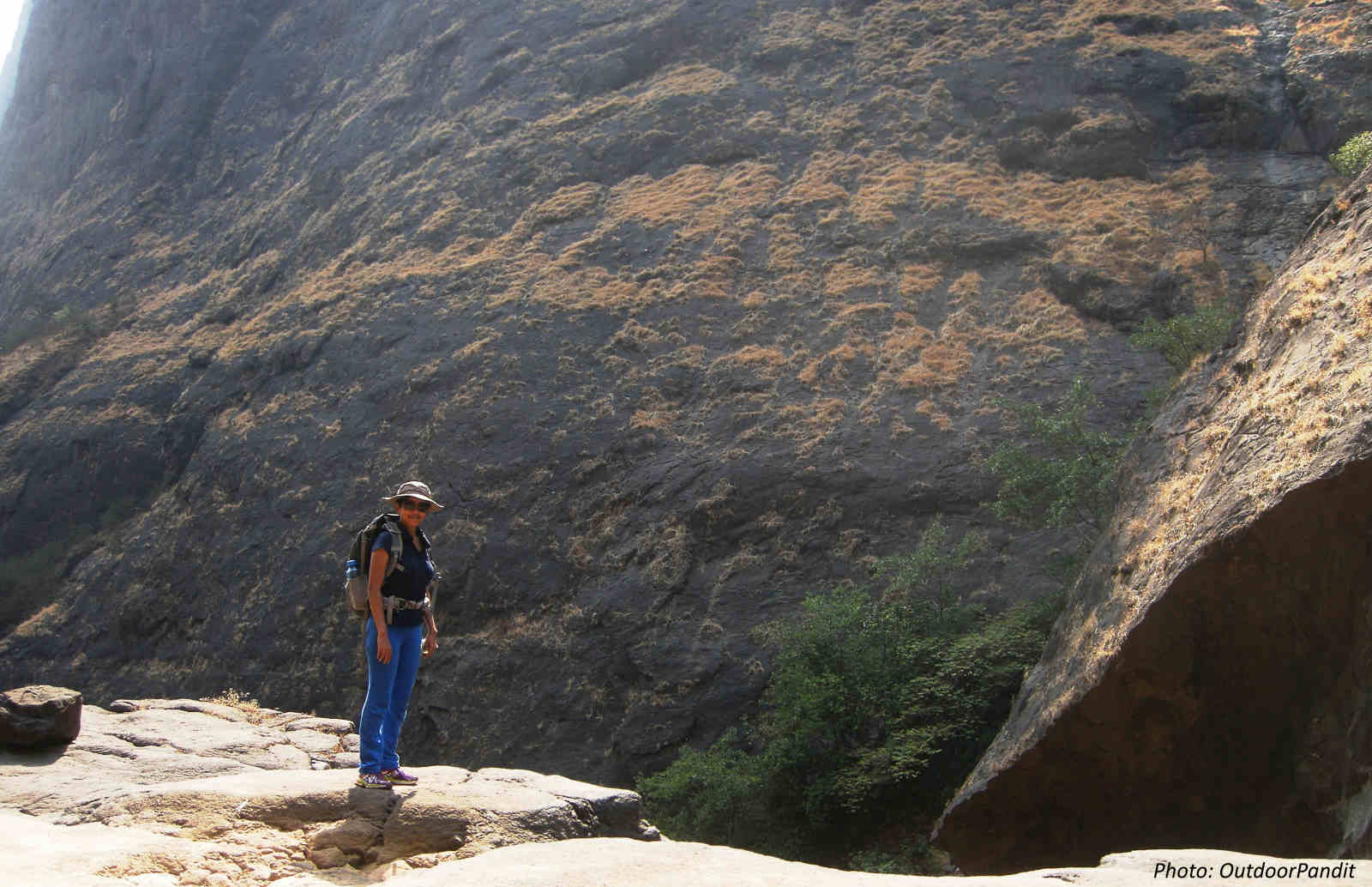 During that scramble down the Kundalika two of us, by far the most experienced in technical aspects involved in negotiating such intricate terrain, exercised highly visible risk management along with ‘effective communication’ to get the others down safely while enjoying themselves thoroughly. Through conversations carried out over chai and meals, Swati came to know more about my formal training in outdoor leadership. We discussed some leadership tools that I had found to be immensely useful not only with my students on extended duration outdoor leadership courses but also for my own personal and professional development. These conversations continued beyond that trip into smaller duration hikes and family visits in Mumbai. Swati commented on how there were many overlaps in the approaches that outdoor leadership appeared to have and the way REBT professionals approach therapy. Both of us found it meaningful and exciting to explore possible parallels between our respective areas of work and see if there is any way we could collaborate.  I underwent a course in Single Session Therapy conducted by In Vivo where our faculty was the renowned Prof. Windy Dryden. 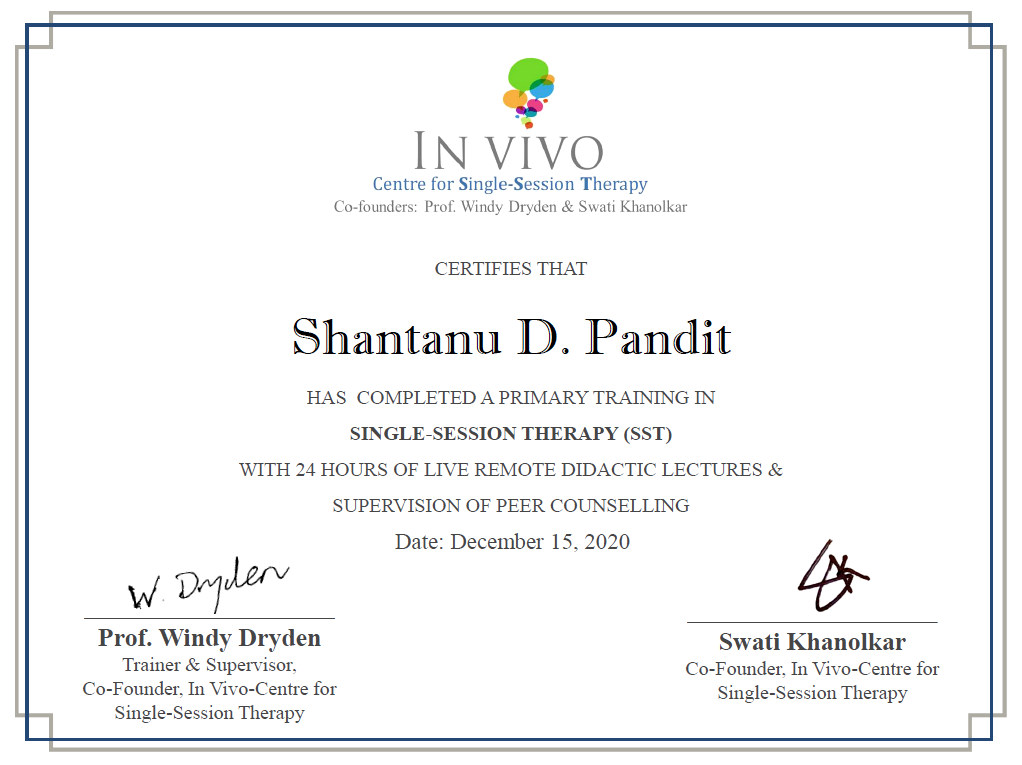 At some point of time during that period, Swati mentioned her international conference in REBT that she and her colleagues had begun preparing for. The conference literally had the who’s who of the REBT world come in as keynote speakers and presenters of topics. One of the components of the conference was to present to participants new ideas for possible research through work being done by REBT professionals and exploring potential associations with practitioners from other fields. And she asked me if I would like to be a part of a symposium where I will be interviewed by her colleague, Trupti Talekar, on the topic of experiential education. The symposium was to conclude with Trupti drawing parallels between aspects of experiential education and REBT, before presenting a model that integrated salient features of both approaches and methodologies. I must admit that I was intimidated! But there was also the thrill of adventure in such exploration! Meeting followed meeting, presentations progressed through successive versions, and finally we ended up doing a wonderful session! 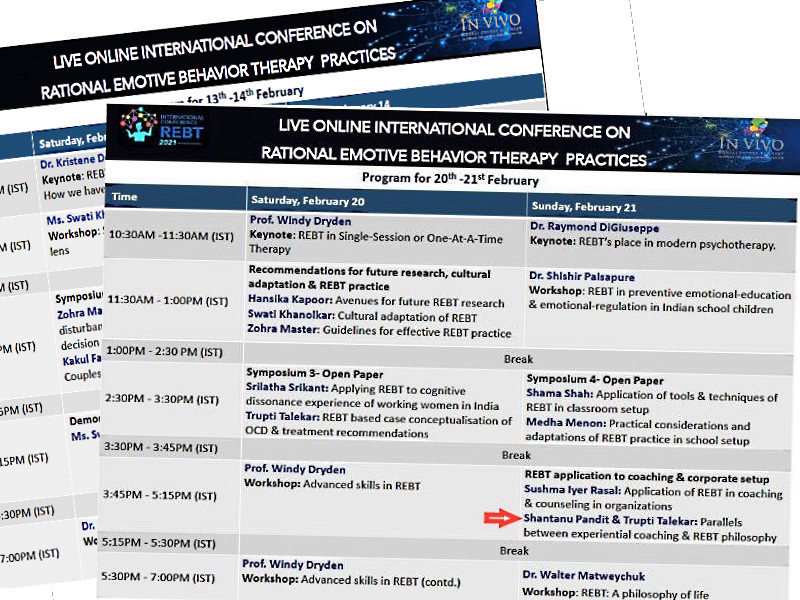 I truly believe that the outstanding scenery through which we walked had its own special impact on our minds, and influenced the quality of our conversations. Great places inspire great thoughts. The outdoors is a blessed place. 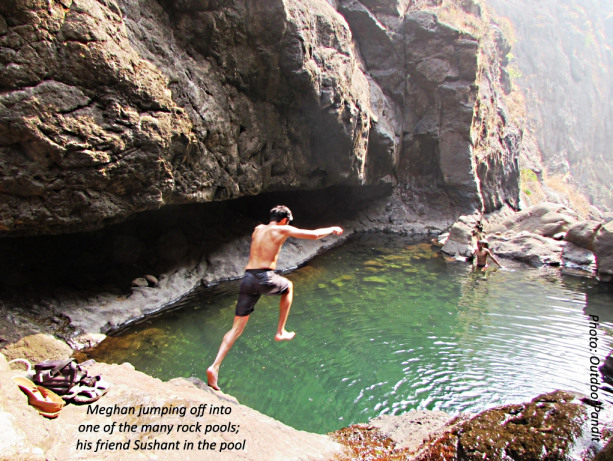 Read about the methodology of experiential education and the two experiences that I used as illustrations in the symposium in this post: https://outdoorpandit.com/2021/02/10/notes-on-experiential-learning/

And we will soon come back with news of further developments!

My post on the power of storytelling & making connections in outdoor education is here.