Of Birds, Insects and Interviews

* ‘Insects are animals, too’ – book by Anthony Wootten *

Don’t ask me how or why but I ended up with an M.B.A. degree and then, trying to look smart in a tie (!), started going in for job interviews. One such episode happened in one of India’s most picturesque and prominent office complexes, situated in the seafront area called Nariman Point in Bombay (now called Mumbai), where real estate prices rival that of the world’s richest. I remember I had gone to a company dealing in ‘reprographics’, the meaning of which I had feverishly searched for in sundry dictionaries (hard copies!) more because I was fascinated by the word than due to anxiety about finding out where I was going for an interview. I arrived early at the address so spent some time sitting by the sea observing stuff. Finally, up on some giddy floor high above busy streets, I walked in, ‘trying to look smart’ but instead in all probability looking what I actually was – a klutzy, bespectacled, mentally-still-stuck-in-teens youth who didn’t know what he was going to do with an M.B.A.

There was only one interviewer. After a few pleasantries, he scanned my biodata and asked, “I see you have bird watching as one of your hobbies.” I nodded. “So have you gone to Bharatpur Bird Sanctuary?” I shook my head saying no I had not had the chance. “Then where do you do bird watching?” I considered the places that I usually went to – the woods outside my hometown, a nearby small bird sanctuary and a bouldering area which is a crazy conglomeration of rocks and trees. He wouldn’t know any of those places. And then, suddenly inspired by a brilliant idea, I gave him a big smile and said, “Why, anywhere there is an opportunity! For instance, today I arrived early for this interview and I spent some time on the seafront below. And that is where I observed birds of prey gliding about using the sea breeze. I could identify them as pariah kites based on their size and slightly forked tails. So many of them! It is amazing how close they come to you. I could actually see with my naked eyes the fine movements of the tips of their primary feathers!” The gent looked incredulous and then angry. “What kind of answer is that? You call yourself a birdwatcher and you have not gone to Bharatpur? You people think you can write stuff on biodata just to impress interviewers?” And so on! He almost spluttered as he became angrier when I tried to explain, and it was only Corporate Courtesy that prevented him from physically throwing me out on my ear but I soon found myself outside his office, absolutely bemused by his reaction! 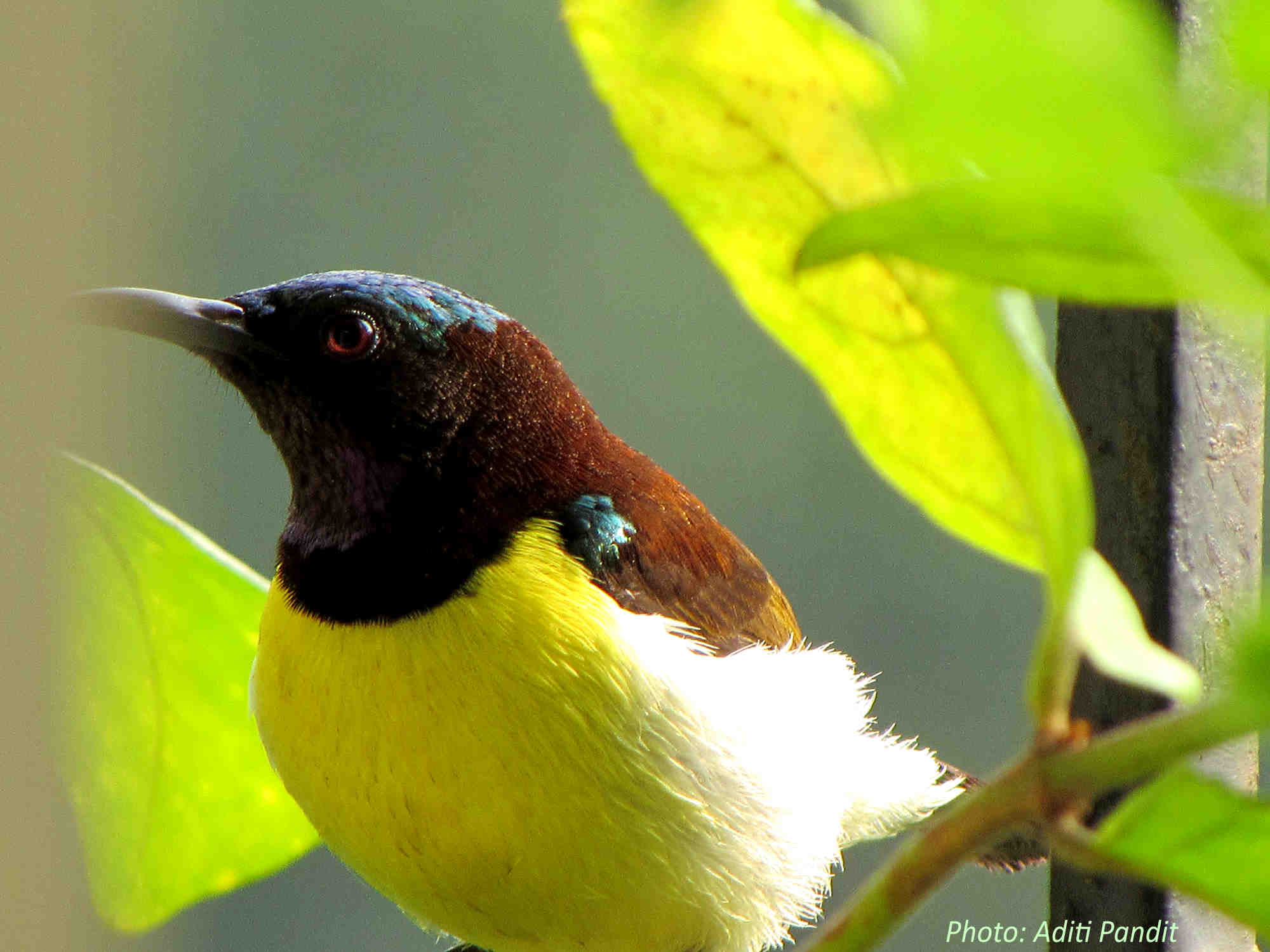 We are all aware of the proliferating wildlife around us, especially insects and birds. We go to extreme lengths to keep the geckos, insects, spiders and birds out of our homes. Many of us have experienced the flutter caused in homes when an enterprising pigeon manages to find a chink in a flat’s armour (meshes covering open windows and verandahs – read about them here in my post on a different topic) and flies around, every so often perching on passing fan blades and cupboard tops. It requires an elaborate strategy to shut certain doors, keep others open, position family members tactically armed with brooms and boards, and guide the wayward bird towards an exit and out of one’s home. It sometimes seems that we have lost our kinship with these wonderful life forms that have managed to adjust and adapt to human habitation. 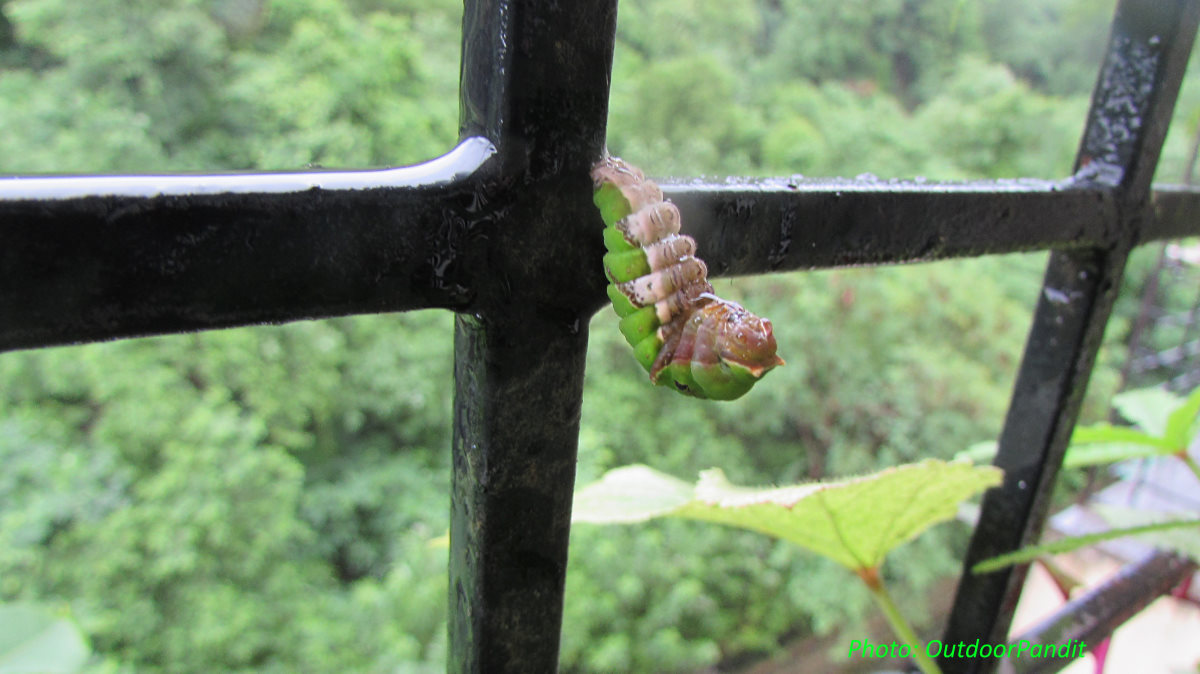 Our little sixth floor garden nestles on a narrow ledge just outside our living room’s window. It has many plants and creepers that have not been ‘chosen with a goal in mind’. My wife gathers plants with the abandon of a collector – a delectable mix of the mundane, the average, the better, and if lucky, the best. There are also random plants that have sprung up and thrived since we don’t weed them out. Our aesthetic satisfaction comes from the small amount of green life in our midst, a life that attracts other forms of life! I once brought a small amount of soil from the woods that are close to my town to top up a pot and soon we had fat slugs and strange insects moving around! Birds like munias, mynahs and purple rumped sunbirds are regular visitors to the flowers that bloom. I love the praying mantises that grace us by their presence in our home. Butterflies and moths lay their eggs and then we have caterpillars crawling around and building their pupae. I guess this is very normal for households which have gardens. 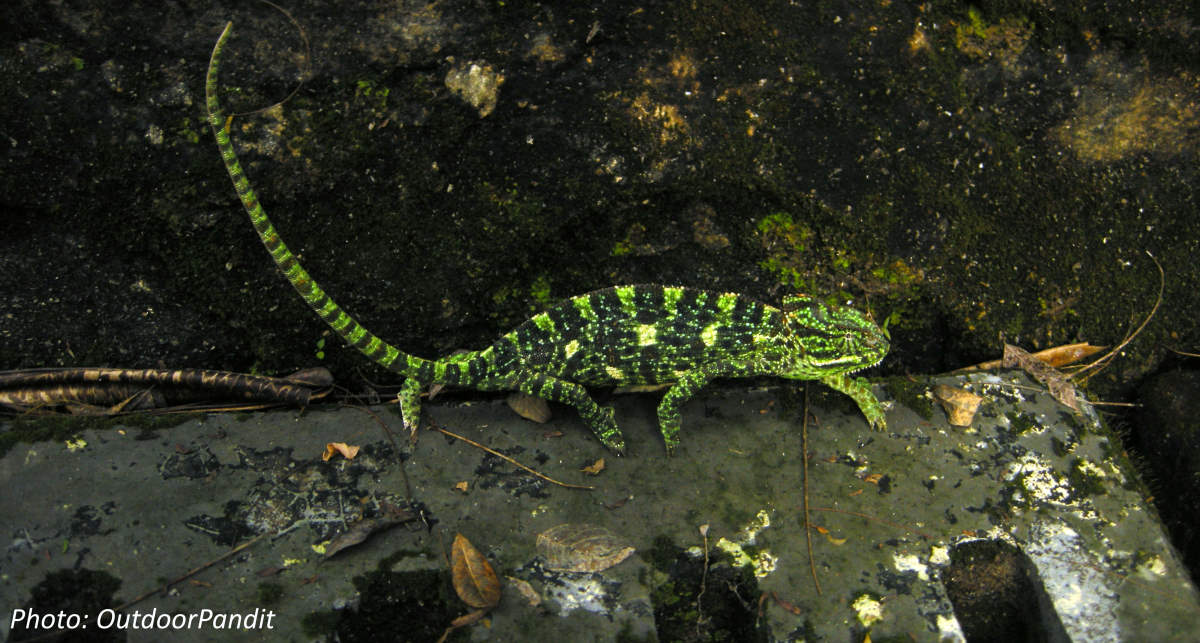 There is one more aspect specific to my housing colony – it is built right next to the base of a thickly wooded slope of a hill that is the southern end of the Parsik Hills, a feature that adds to the richness of life forms we get to see and encounter. We have often seen snakes that have slipped in into the colony’s premises, mongooses scampering about in the foliage outside the compound, and once even a monitor lizard which blundered in through a breach in the wall caused due to a landslide. But my favourite has been a chameleon! I had run down after hearing children and a few adults creating that typical uproar that happens upon seeing a feared creature. I overheard comments like how ‘poisonous this lizard is’ and how ‘it aims for the eye’! I had picked it up and placed it just outside our compound through a space created for water to drain. It slowly disappeared in the foliage, seeming to take what appeared to be hurried steps in the chameleon world… or maybe it was my fancy! 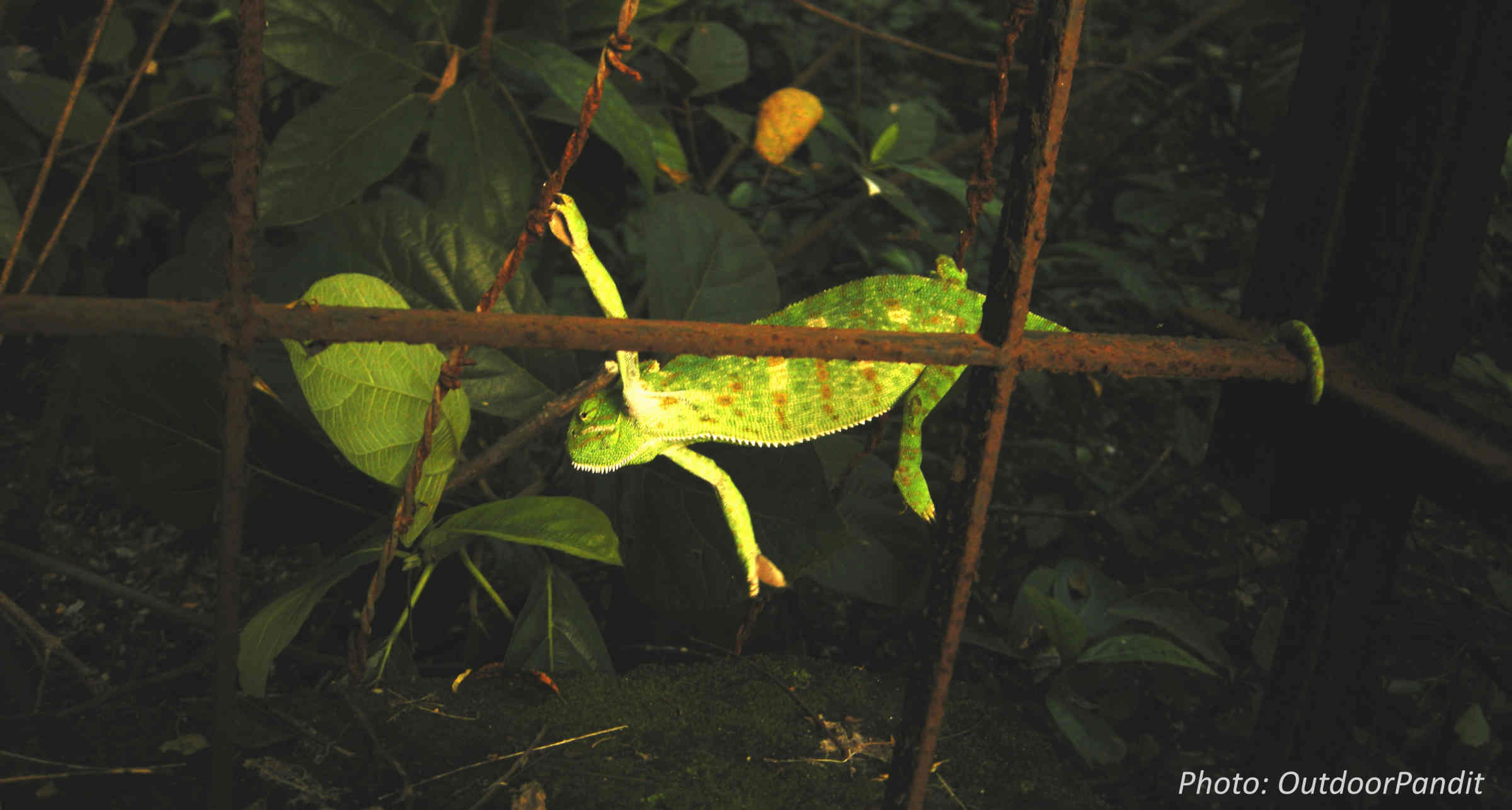 Here is something that I once recorded. A spider snacking on a small insect… 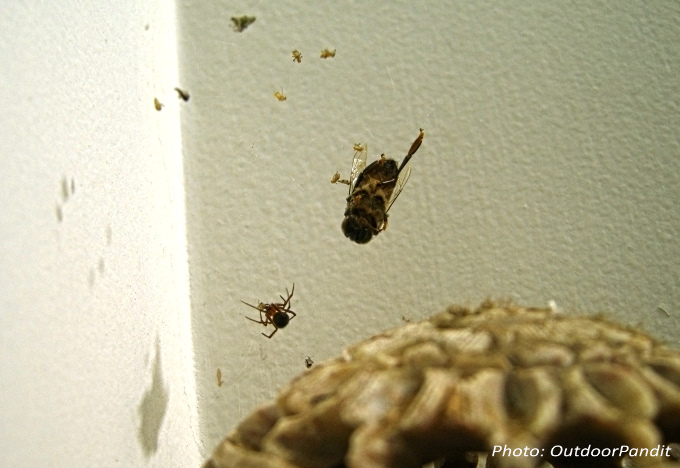 Before eventually turning its attention to the larger prey… and… in silhouette this looks quite sinister, conjuring up images of giant spiders advancing on humans in horror movies… and I wondered what the prey must be going through as the eight legged monster advanced towards it… 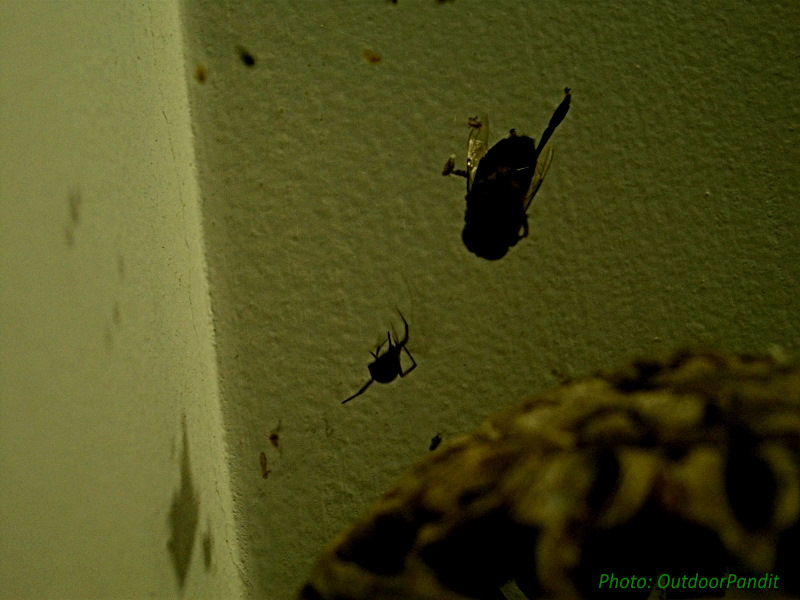 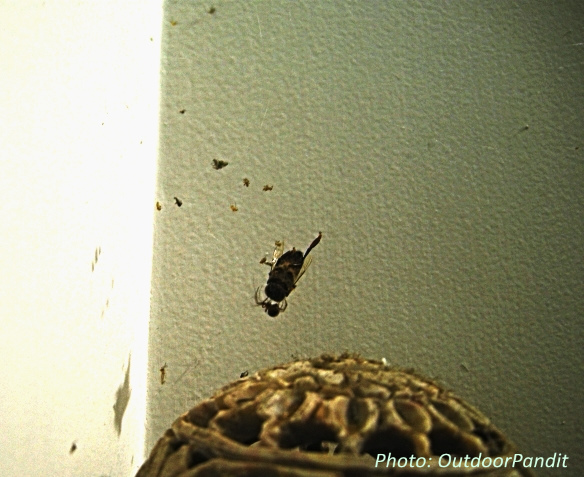 I am aware that these are not quality photographs. I have tried to grab moments and happenings with the help of a simple camera or my cell phone, not paying much attention to focus, composition and lighting. This post is about being aware and sensitive to how precarious the existence of these life forms has become when we build our homes close to and within their habitats. Out of such awareness will rise concern and the will to do our bit to contribute to dealing with the big challenge of co-existing with non-human life forms. At the least, we will enjoy beauty and drama that exists right next to us. That interviewer, that gent, all he had to do was glance once in a while outside his glass window on the umpteenth floor, and he could have flown with the pariah kites.

Nice article Shantanu. The variety and beauty amongst birds is mind boggling. After dogs they are my favorite creatures. Here too we are lucky to have a lot of greenery in our society(a rarity in Pune) and so a lot of birds!
Your snap of the spider reminded me of one I saw in Assam in our house where a mid size scorpion was stuck in the web.

A scorpion in a spider’s web! Wow! Thanks for writing in, Kedar

Lovely article Shantanu, Yes! We live in a concrete jungle with its hustle n bustle managing our survival but if one has the inclination and eye one can surely find bits and fragments of myriad forms of nature trying to eke out niches for survival. Being sensitive to our surroundings can give us a lot of solace in life.

‘Solace in life’ – nice! And so true. Thanks for writing in, Bibhas! Hope all is well.